The noted poet James Baldwin once said: “Not everything that is faced can be changed. But nothing can be changed until it is faced.” In this spirit, leaders at the Health and Human Services Summit forcefully faced the persistent challenge of ensuring that every individual, every family and every community has equity in health and human services opportunities and outcomes.

The resolve in the room was palpable. In fact, 90% of Health and Human Services Summit attendees reported that improving equity in social and economic mobility is extremely valuable in achieving new outcomes, and 39% included ‘racial equity in opportunity and outcomes’ as one of the field's biggest drivers of change.

The mindsets of health and human services policymakers and executives show that advancing social and economic mobility is one of the most pressing challenges of our time. Equity in the hope and realization of building a better life helps hold the social fabric of communities and the nation together. Yet by most accounts, social and economic mobility is declining in the United States. By broad measures, the middle-class of the country is shrinking while the rate of extreme wealth and those in deep poverty are rising. When viewed from a race-based lens, the decline in social and economic mobility is even more stark. For example, the median White family had more than ten times the wealth of the median Black family in 2016, and the gap between Black and White families grew by $54,000 from 1992 to 2016. The generational effects of this gap result in an array of negatives outcomes, such as the fact that 70 percent of middle-class Black children are likely to fall out of the middle class as they move into adulthood. In addition, inequities are being found in the LGBTQ community. For example, in LA County alone, 20% of foster youth identify as LGBTQ, which equates to three times overrepresentation.

Listen to the Associated Podcast 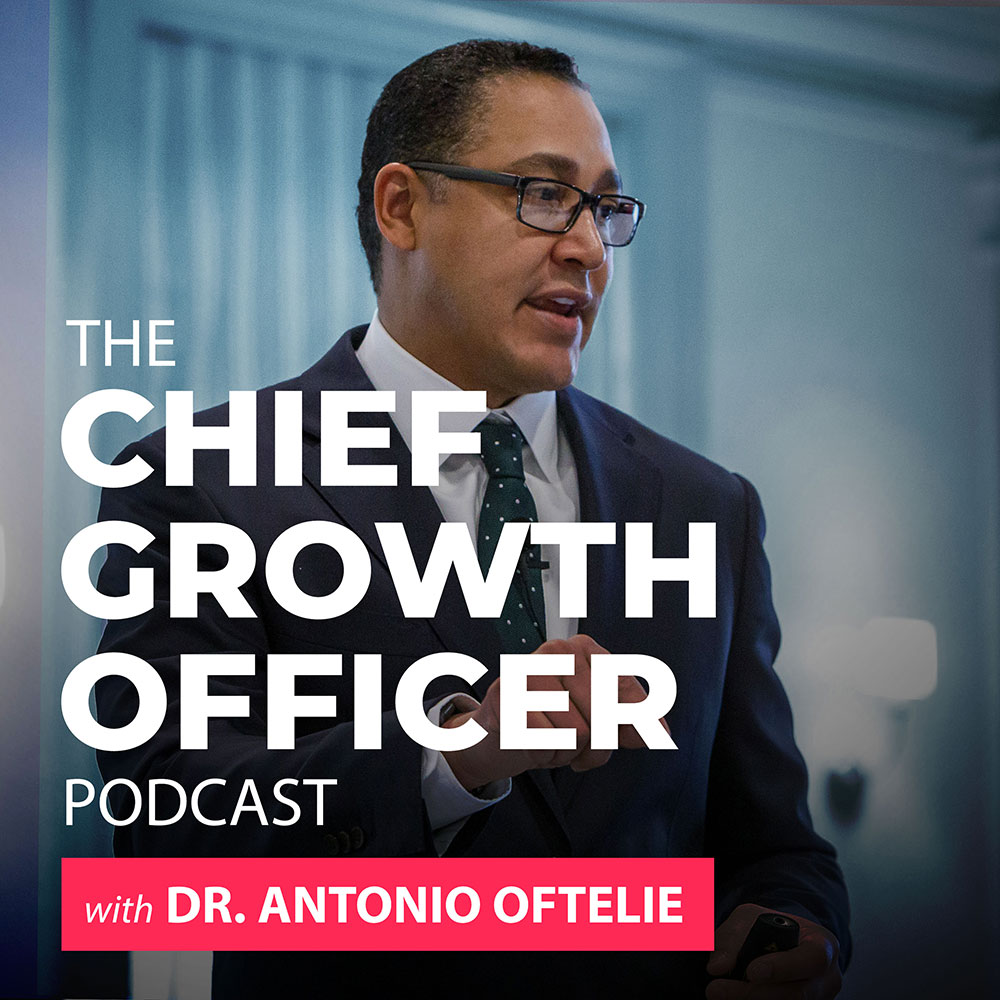 Joe Jones and the Center for Urban Families

Leaders often need to shape their mission while balancing the demands of stakeholders, building a team that embodies this mission and ensuring the outcomes they seek remain in focus.

For over 20 years, the mission of Joe Jones, Founder and CEO of the Center for Urban Families (CFUF), has been to invest in the whole family. His overarching goal has been to lift up and empower fathers and to ensure that they are receiving the guidance and resources they need to become and remain an integral part of their family.

In this insightful podcast, Joe candidly shares his vision to “dismantle poverty” and opens up about some of the challenges he’s faced, barriers he’s had to break through and the valuable lessons he’s learned along the way

Apart from the social and human cost of decline in social and economic mobility is the economic cost. The nation’s growth and prosperity are suppressed by inequality. For example, according to recent analysis by McKinsey & Co, closing the racial wealth gap could grow US Gross Domestic Product six percent by 2028, thereby lifting all people to a brighter future.

The potential for both equity and growth is driving an inflection point for leaders in health and human services – and the strategic imperative is to orient services and solutions more directly at equity. According to a panel made up of Michael McAfee, CEO of PolicyLink; Bobby Cagle, Director of LA County Department of Health and Human Services; and Susan Gale Perry, Chief Deputy Secretary of the North Carolina Department of Health and Human Services, a new vision and set of actions is needed to truly make lasting progress.

At the Health and Human Services Summit, in a session moderated by Antonio Oftelie, Executive Director of LNW, each of these three leaders shared the steps taken by their organizations, along with their respective visions for improving equity in social and economic mobility.

The sections that follow represent the most salient themes from the panel, and conclude with an overview of action steps brainstormed by summit attendees to help guide other leaders in this work.

We have to be courageous to talk about our own selves and our own stories and acknowledge that experience is different in different forms of inequity. And all of those are real and true and we need to take them all on.

Typically, conversations about race and equity tend to stem from the dominant theories and ideologies that permeate institutions, policies, and practices. In the United States, policy and practice discussions are often centered from, developed by, and paced through a lens that historically has been white-centric. McAfee challenged this status-quo by saying, “equity can no longer be held hostage by centering whiteness”. This means that working toward equity requires acting without waiting for permission from those with privilege to ‘get it’. According to McAfee, we will only begin to center the stories of the 100 million people living at 200 percent of the poverty level in the United States when we make space for leaders with radical vision and politics, who act without fear of upsetting someone in a position of power, to emerge. We have the resources, said McAfee, to provide support for those living in poverty…We are not a broke nation. We seem to only be broke when it comes to talking about black, brown, and poor white folks”

In addition to ‘decentering whiteness’ and supporting diverse and radical leaders, Perry and Cagle each emphasized the importance of telling new stories by using an equity-focused lens to interpret data. For example, in Los Angeles, Cagle said, infant mortality, child maltreatment, and pre-Kindergarten expulsions disproportionately affect black and brown communities. One might explain these numbers with social class. Yet looking more deeply, these outcomes cross class for black people. Thus, they are not the result of people’s poverty. Rather, the numbers reveal the implicit bias with which services are delivered. It is crucial, he said, not to stop at just putting out data, but to find the nuanced and complicated stories behind the data.

Similar to Los Angeles, Perry shared that North Carolina has the eleventh-highest infant mortality rate in the country, and that the infant mortality rate for black babies is twice as high as it is for white ones. Black communities are also disproportionately affected by third grade reading proficiency issues. Her office worked to reduce these disparities through diversifying its leadership and by providing implicit bias training for the entire staff. They also analyzed data about disciplinary action, retention, and promotion of staff, knowing that they couldn’t work for racial equity outside of their walls if inside they were working from status-quo models and mindsets. Undergirding this logic, Perry said, is the idea that “we have to be courageous to talk about our own selves and our own stories and acknowledge that experience is different in different forms of inequity. And all of those are real and true and we need to take them all on

Through courageous and radical leadership, as well as through digging more deeply into the uncomfortable truths behind inequity, the panelists agreed, we can move toward more hopeful and equitable outcomes.

Leaders with radical vision are key in this work. McAfee emphasized the importance of the radical imagination and optimism of a critical mass. We give credence to the myth of meritocracy in the United States by frequently telling the stories of outliers: those who pull themselves up by their bootstraps against all odds. Instead, we should build coalitions around the more common stories of those whose opportunities are curtailed by inequitable social structures. When these stories are told, people who may not share identity markers, but who share an interest in increasing their own communities’ access to power, resources, and life chances can share goals for social change, and can create ways of measuring those goals. McAfee discussed the possibility of building coalitions between black, brown, and poor white people, and shared that the point is to share the understanding of how people got to where they are: “The challenge is not to get into this pissing match back and forth”, he said, “but just to acknowledge the truth and figure out how we can work together” (25). The trick, he said, is figuring out a solution that benefits the 100 million living at 200 percent of the poverty level.

Coalitions and good leadership are key, and Cagle reminded the panel that in some organizations, as opposed to promoting from within, it might be necessary to bring an outsider in to lead and create the culture shift necessary for change. But leaders can’t do this work alone. Everyone is responsible.

Implicit Bias Training is Necessary… But Not Sufficient

Cagle emphasized that making headway advancing equity demands more than just implicit bias training: while the training is an important step, we must also change policies. Perry agreed, stating that we need to create the conditions that allow the work to happen. Those in organizations need to ensure that the work is well-resourced, and they must hold themselves accountable for making it happen. For Perry, this includes maneuvering around pushback. For example, she and her colleagues refused to remove a reference to structural racism in their early childhood action plan, despite significant political pushback.

For McAfee, shifting policies and social structures is about playing the long game – this is not work that will be done in just a few years. He said that “winning on equity is about a structural redesign of this nation… and we should not be apologetic for that. And we should not act like we need to take a back seat to business interests. Our work is just as important. All sectors are needed” (9). McAfee added that we won’t win on equity through relying on charity, rather, we win through shifting legal and regulatory frameworks, and building equity by design over time.

Building equity, he emphasized, is about more than just lip service in organizations’ documents, it is about learning to do the work, and no longer participating in learned helplessness. Leaders must embody the work by making equity-centered decisions from the top of their organizations. And, as Perry and Cagle pointed out, the work toward equity can be built into programs like North Carolina’s Early Childhood Action Plan and Los Angeles’s Eliminating Racial Disproportionality and Disparity Program, which strengthen communities from the ground up. Panelists agreed: leaders, organizations and communities must all have a hand in working to envision and realize equity in social and economic mobility.

Action Steps to Activate Ideas on Social and Economic Mobility 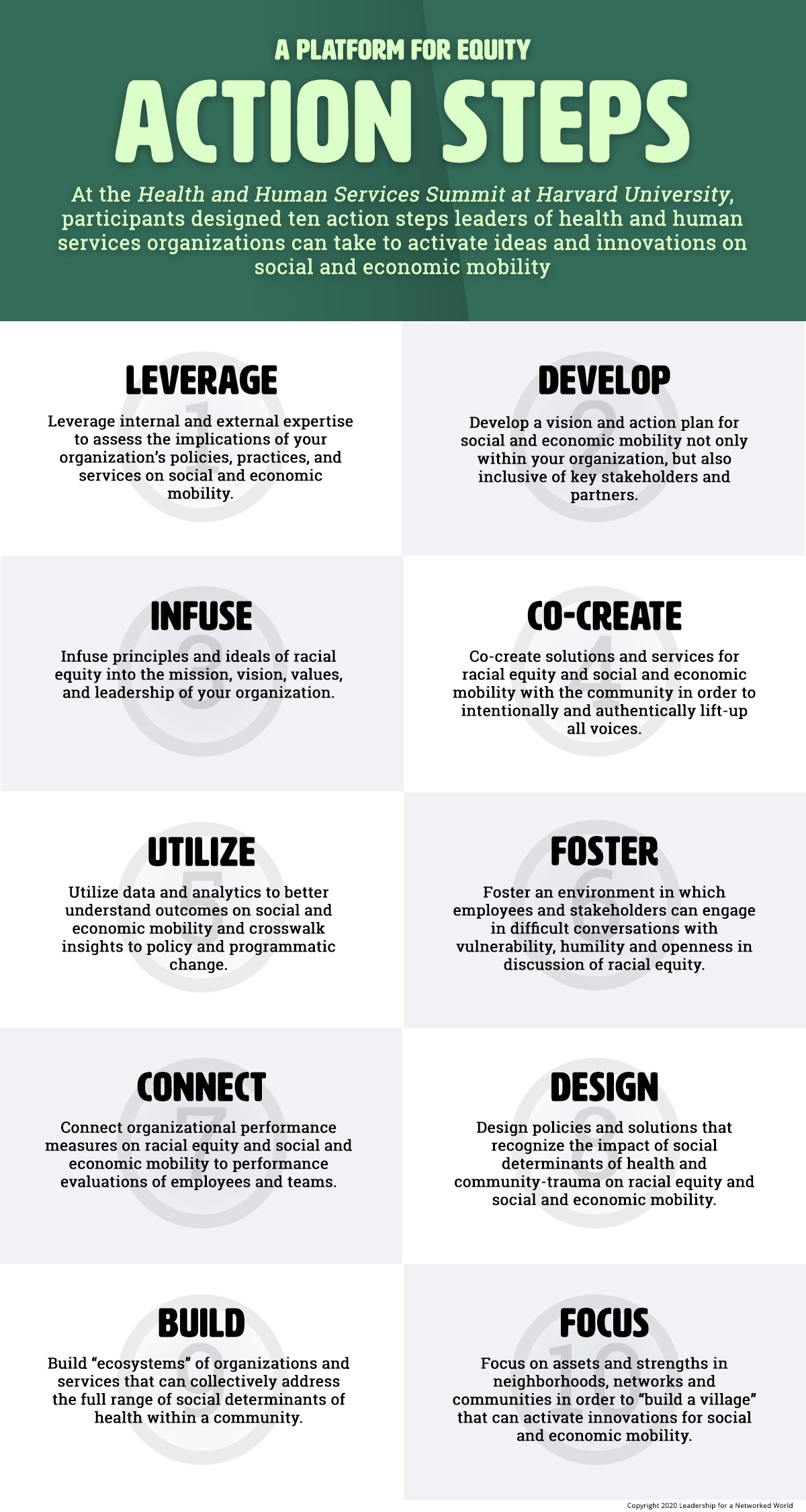 We have the resources to provide support for those living in poverty… We are not a broke nation. We seem to only be broke when it comes to talking about black, brown, and poor white folks.

Addressing the Opioid Epidemic in Kentucky

In 2015, 1,307 people died from opioid overdoses in Kentucky, resulting in Kentucky having the...

The Office of Healthy Opportunities: Moving Upstream in Indiana

For Fiscal Year 2018, the state of Indiana’s Medicaid budget was a whopping $11.8 billion. Despite...

Pathways to a Brighter Future: Fixing the Cliff Effect

The United States is a land of opportunity – a country that prides itself on the promise that if...